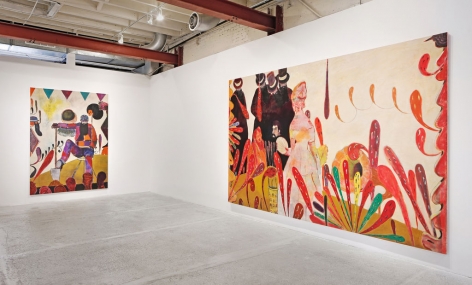 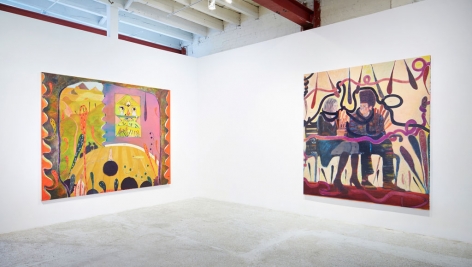 Denis Gardarin Gallery (as Tierney Gardarin) is pleased to present Thoughts of Man, the first New York solo exhibition by British painter Ryan Mosley, opening June 27 and on view through August 9, 2013. This exhibition is the artist’s first with the gallery and he will be present at the opening.

Using riotous color and a phantasmagoria of form, Mosley's large-scale paintings are fantastic spaces where the history of art, the South Seas, and even the Wild, Wild West cohabitate. An assortment of quirky characters dance across picture planes as if they were stage sets, making liberal reference to both burlesque and the litany of artists who have embraced it. Botanical Theatre teases at a narrative, with the female performer at its center and a somewhat lecherous group of top hats looking on. Surreal, plant-like forms--whether they entice or threaten is uncertain--balance the right side of the picture but do little to clarify meaning. Botanical Theatre features compositional conceits borrowed from Toulouse-Lautrec, color inspired by Bonnard and a painting technique as inventive as that of Degas. Yet Mosley's particular combination of formal elements is decisively contemporary, drawn from the artist's own imagination. His use of art history is indirect; a dependable friend to be alluded to now and again. From this peculiar patchwork of images, Mosley composes paintings that are somewhat absurd, profoundly poetic and enigmatic and totally appropriate for the world in which we live.