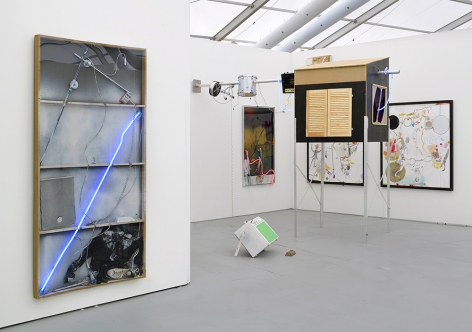 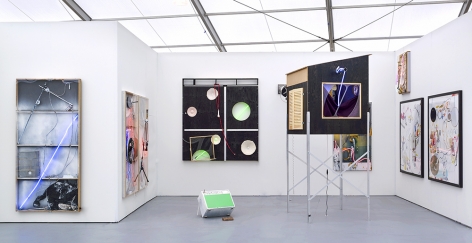 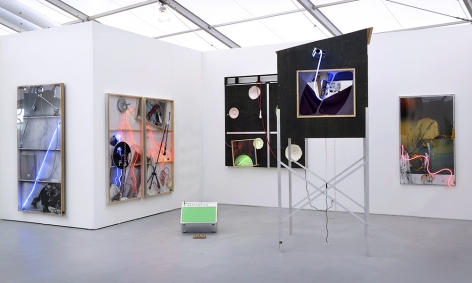 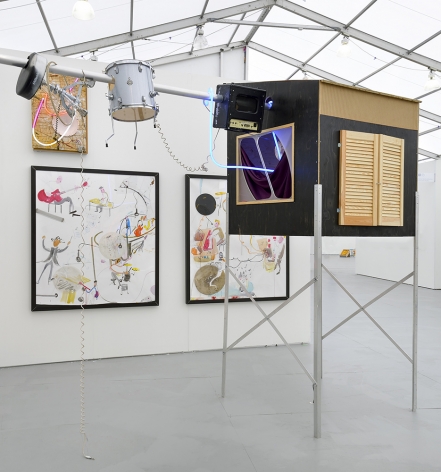 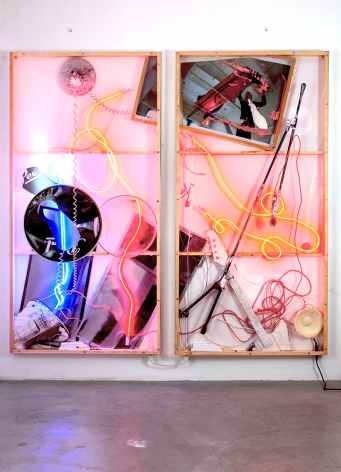 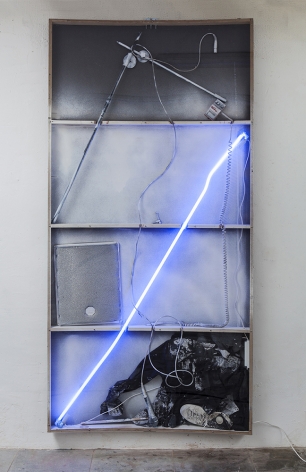 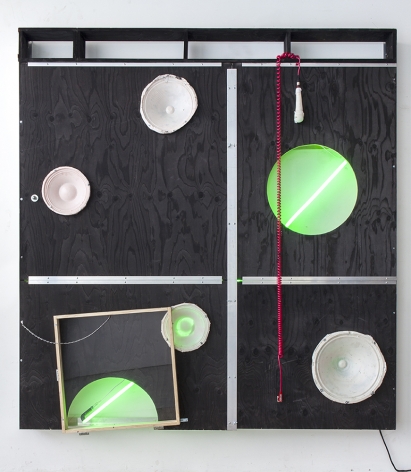 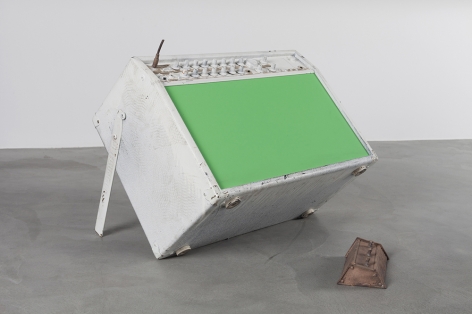 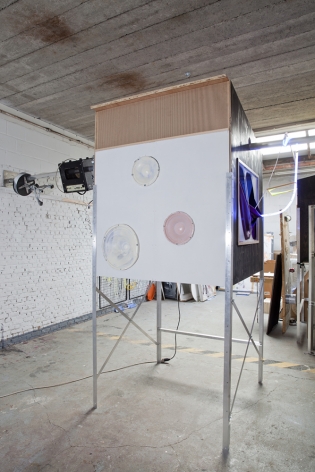 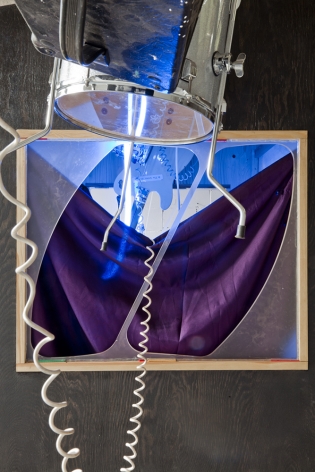 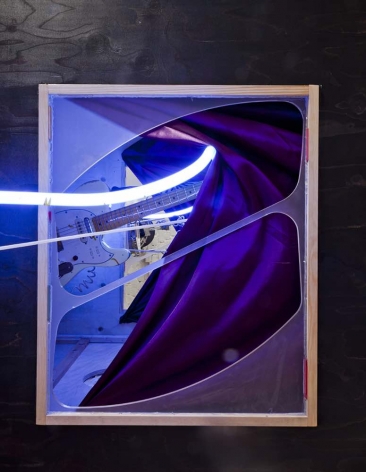 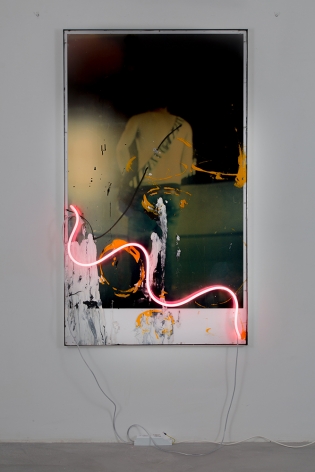 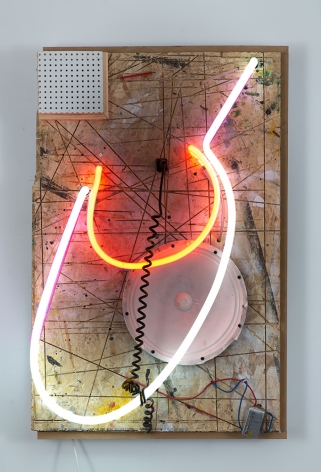 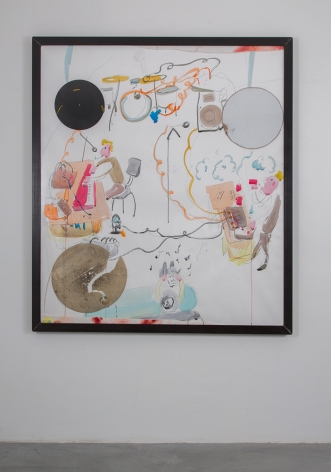 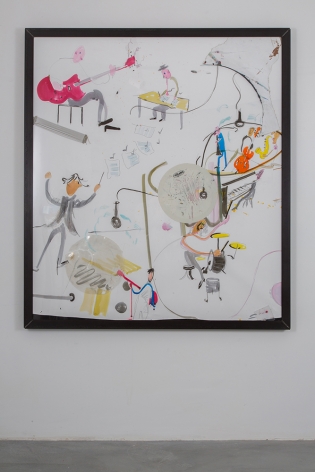 Denis Gardarin Gallery is pleased to present Rotten Sun, an installation of new works by Belgian artist Joris Van de Moortel at UNTITLED, Miami Beach (Booth B3). This is the artist’s first solo exhibition in the United States.

Embodying the fervent spirit of concrete music and rock and roll, Van de Moortel’s process-driven work encompasses sculpture, painting and musical performance to explore the tension between the static nature of objects and their potential for energy. Hanging at the precipice of “doing” and “undoing” – through planned accidents and improvisation – Van de Moortel transfigures objects, stripping them of their original function and meaning to give rise to new forms.

The exhibition theme Rotten Sun is drawn from a George Bataille essay, which frames the sun as a paradoxical phenomenon – an exalted force capable of both creation and destruction.  As an amplification of his performance work which climaxes in cathartic instrumental destruction, Van de Moortel’s mixed media paintings, figurative drawings and sculptures are the assemblage of musical instrument fragments, neon tubing and other remnants of performance debris that, when combined, achieve an unexpected sense of harmony.  As an index of prior actions, he lays bare the permanent tension that exists between order and chaos. This brutal narrative animates his works with no clear beginning, middle or end, only constant and energetic flux. Yet the deft with which he treats their presentation reveals precision and a pure sense of refinement. Van de Moortel has said that his process “functions as a modus to let the unexpected slip in, and in which everything is in constant movement and an ever changing position, so nothing becomes static.”

Like Arte Povera artist Mario Merz’s use of neon which galvanized everyday objects and fused the organic with the inorganic, Van de Moortel creates dynamic, self-contained environments and applies neon as brushstrokes that escape the contour of representation, creating a force of energy and freeing itself from the frame. In Dramatic lightning and billows of fog, it's rare for any two performances to sound and look the same (2015), worship and desecration run like alternating currents through the sculptural composition. The arrangement of a microphone, cables, resin-covered speaker and pieces of a drum contained within the wooden frame suggests an unseen stage, while two curvilinear neon tubes cast a glow that bleeds like a wash of color across the work’s surface. The smashed gear and pulse of light shiver with the unexpected harmony of calm seen only after destruction.

In Van de Moortel’s Bird House (2015), the most ambitious work in the installation, speakers covered in thick resin animate an orchestral watchtower. The objects, formally energized by music and sound, are now muted and an aluminum bar violently pierces the objects as neon casts energetic light on the sculpture’s immaterial dimensions. The sculpture is one of a new series of six included in Van de Moortel’s upcoming solo museum exhibition opening later this month at Be-Part Center for Contemporary Art in Waregem, Belgium. A new monograph of Van de Moortel will be published with a chapter devoted to the Rotten Sun exhibition at UNTITLED, Miami Beach.

Joris Van de Moortel (Ghent, 1983) lives and works in Antwerp. Having graduated from the HISK (Ghent) in 2009, and residing at the Künstelerhaus Bethanien (Berlin) in 2012 and 2013, his works have been exhibited in various international institutions, including the Palais de Tokyo, Paris; the Central Museum, Utrecht; the Museum Cultuur Strombeek, Grimbergen; the Künsterlerhaus Bethanien, Berlin; the Fondation Boghossian – Villa Empain, Brussels; the Musée Sainte-Croix, Poitiers and the Maison des Arts, Malakoff.  Van de Moortel recently completed a collaboration with fashion designer A. F. Vandervorst. 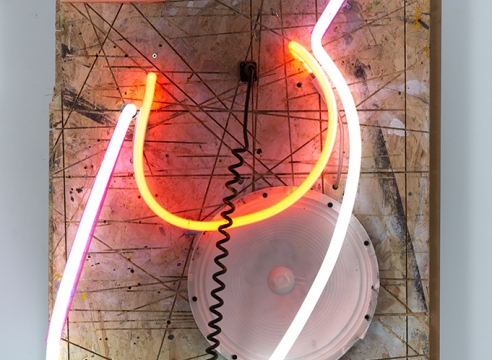